Our flight out of the USA took off early saturday morning, so we decided to stay at the gorgeous Westin Hotel basically inside Denver International Airport. We slept a bit before our 430am wakeup call, but REALLY it was more like a nap. Anyway — we got our bags checked, headed through security, got a bite to eat and boarded the flight half asleep. Although our flight time wasn’t too bad it wasn’t direct, we had one short stop in Vancouver before Beijing 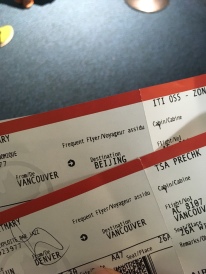 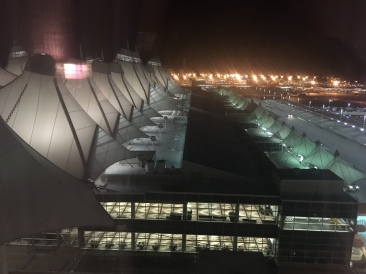 Along the way my mom naturally talked to a few Colorado families that also happened to be going to back to china with their adopted child just as we are.

After we landed in Beijing, the first thing I noticed was how fast paced and crowded the culture felt. People looked as if they were on a life or death mission. No one seemed to leave even an inch of space anywhere. I definitely could even feel people breathing close to me and got shoved a few times at the baggage carousel, but don’t worry we made it through the airport, found our driver and then met our friends Hannah and Deb from Minnesota! 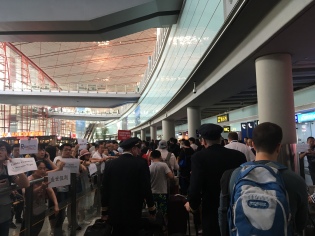 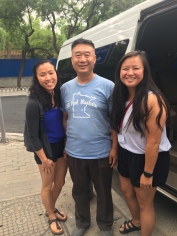 That night my parents went straight to bed without food, while Deb, Hannah and I had dinner at a chinese restaurant close by. We ate some simple rice and noodle dishes, while chatting and people watching across the patio.

We started the day in Beijing with breakfast at our hotel.. which sometimes isn’t great, but this place had a massive variety of choices! They had everything from pastries to eggs to noodle soups. It was pretty delicious, but also a lot of food in the morning. Following breakfast our Beijing guide Viola and our driver Lee picked us up in a van to get us to our first destination Jingshan Park near the Forbidden City.

At the entrance of the park we saw two similar lions on either side of the door. Despite their similarities Viola told us one was male and one was female. After looking at them more closely I noticed that the lion on the left had a cub under it’s paw and the other lion had a ball, so clearly the lion with the baby was the female. 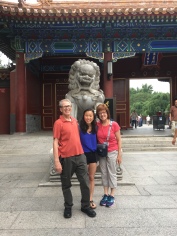 As soon as we walked into the Gates of the Park there were a variety of older chinese people writing characters on the pavement with large paint brushes . Viola told us this is a leisure activity some locals take up, that is very difficult to master. It also quickly fades away since they were only painting with water. 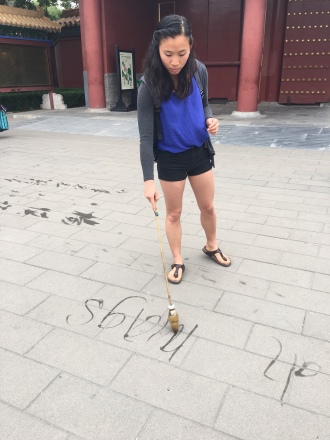 In the park we walked along the many pavilions nestled into the hills until we over looked most of the forbidden city. The view was great and the walk peaceful. The trails were lined with trees and each pavilion was very intricate and colorful. It is incredible the pavilions are so sturdy since they are almost completely made of wood with only a few nails near the roof. 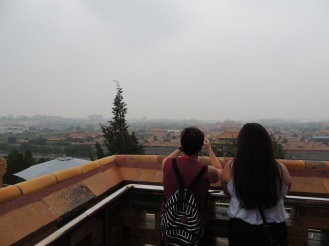 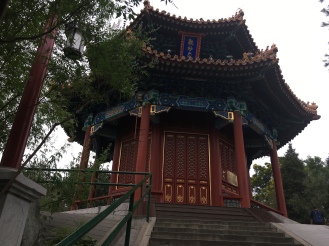 Following the park walk we headed to the Hutong – “alley village” – neighborhood to get a glimpse of what many villages would have looked like in the past. Since there were not many cars around when these neighborhoods were common the streets were a lot smaller and rickshaws were a common way of transportation. In the area we went on a tour to see two types of family homes. One home had a private “yard”—outdoor commons area between rooms — and bathroom. While the other had one yard to share between maybe 10 families with shared toilets. At the first private yard home we ate lunch and had traditional Beijing dishes, including leek and egg dumplings we helped roll. Everything they made was delicious and although they didn’t eat with us it was nice to see inside their daily life. 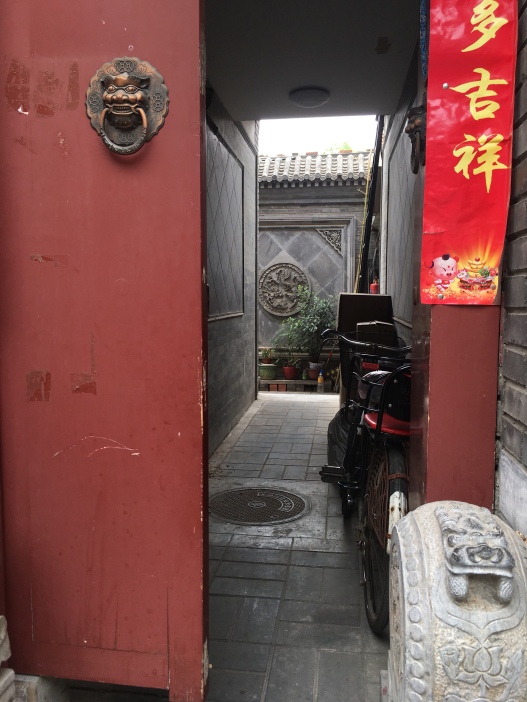 Another difference in the houses was the number of beams/stars above the door that noted the beauty and design of the home. Some homes even had rooftop gardens to grow their own food and all the homes had some sort of trash service that was hauled out twice a day by small trash motorbike trucks..? To me the homes all seemed fairly crowded and simple, but we often have more space then we know what to do with in America and viola says the community in these places is very strong which is something we can easily miss by living in such large homes. 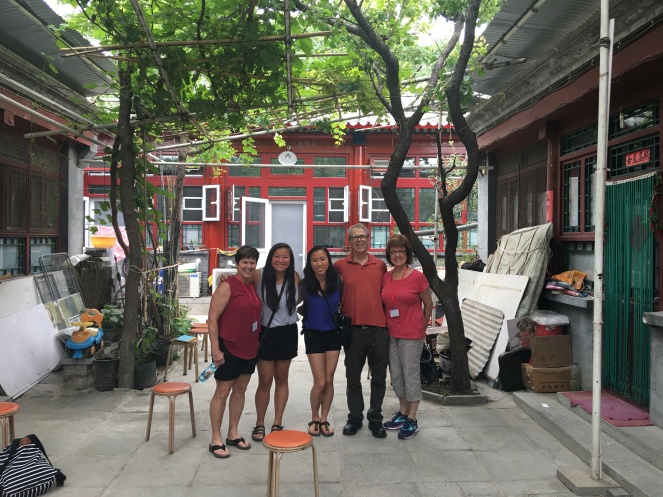 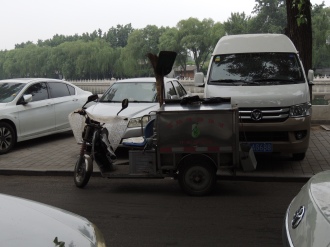 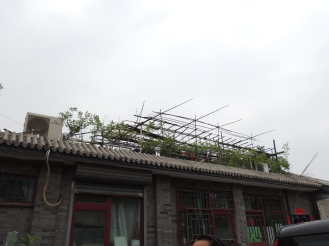 That afternoon our guide left us to explore for the day and we went to the temple of heaven—a place the royal families used to worship the gods or have big ceremonies. The temple grounds were huge and actually getting there was the biggest challenge, we took a two taxis: my parents in one —deb, hannah and I rode in the other. My parents got there fine, but the second taxi was late and then told us we couldn’t go to the same gate because there was a fire. After lots of miscommunication and bas translate attempts— He brought us to the opposite north gate maybe a 30 min walk from my parents. Not ideal, but it worked.

We went into the park and took a little stroll along the green paths. After we found my parents, we look at the Center Altar and the Echo—- . It was fairly crowded, but still nice to see the large space where the royal family came to worship and host large ceremonies. 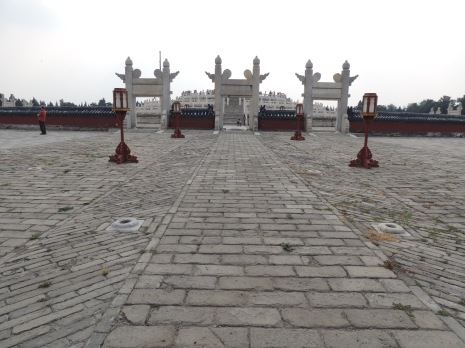 Finally after our long day we headed back to the hotel by subway and it turned out to be very cheap and easy. Our ticket was less than 50 cents each! They had english at the payment kiosks and all the lines were colored on a map so we made it to our hotel no problem.

After making it back to the hotel we were pretty pooped and not too hungry, so we went to our rooms to rest. However, for my family this rest turned out to be bed time. Apparently we were still a bit jetlagged?

We had breakfast at the hotel and then headed out to the Great Wall, our weather was a bit cloudy and there were chances of rain. However, we were very lucky and never got poured on.

The Great Wall is over 1400 miles long and not all of it is intact or restored so to see a part that is in good condition we headed to the Badaling section. When we arrived we took a long peaceful walk along the steep steps/ramps taking in the endless greenery and nature that surrounds the wall. It is incredible to imagine all the people working so hard to build this enormous wall so many years ago without all the tools and machines we have now. Yet it is also very sad to think about all the workers that got buried into the wall. My aunt rita likes to call it the longest graveyard in the entire world.

Along the pathway to the wall we stopped at a stone that said good fortune and on the way out we saw a quote from Mao that roughly translated says “he who has been to the great wall is a true hero.” 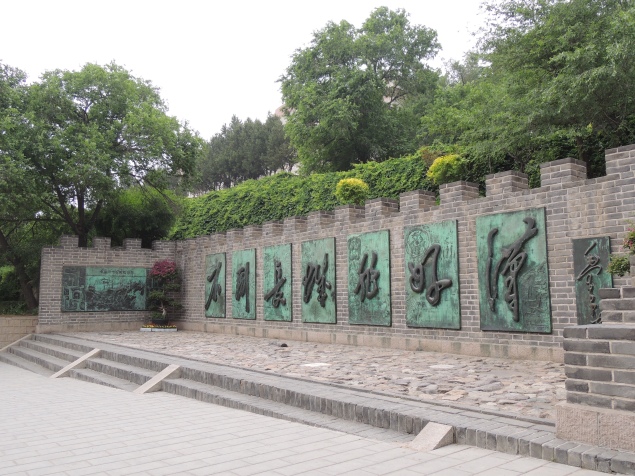 I That afternoon following the great wall we headed to the Beijing Olympic Park, where they held the 2008 Olympic Games. We strolled around, saw the official buildings and just took in the massive grounds that hosted millions of people for this one time event. It is strange to imagine all this was built just for a one time event, Viola says that they use it now for some concerts or things, but often it is just very empty. 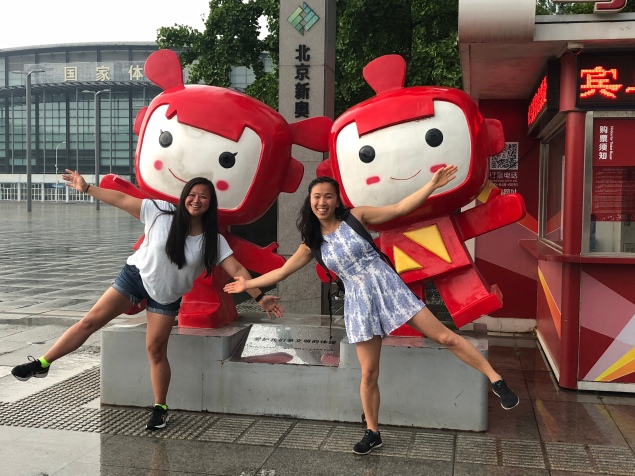 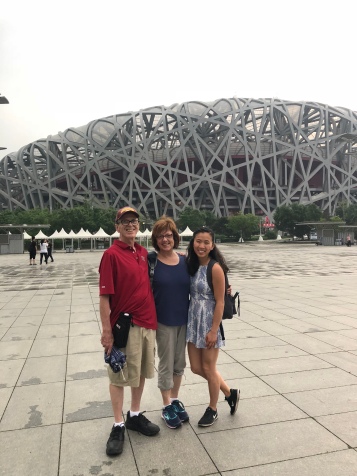 That night we had a traditional peking duck dinner and I went off to explore on my own for a while after dinner. Our hotel was in the middle of the city and I discovered a mall, as well as a night market.The mall was very modern and had lots of recognizable shops. I didn’t purchase anything to bring home, but got a boba milk tea to sip on along the way. At the night market I got a few things for friends to bring back home and found this drink made with dry ice that slowly smoked over. It was really fun. The market overall reminded me of those in Bangkok that had many exotic foods, including multi legged bugs and chicken feet on a stick. I didn’t try anything strange, but instead ate a massive soup dumpling— probably my favorite food ever. In most places they are called xiao long bao. If you have a chance to try them do it! The soup infuses all the flavors of the dumpling meat and is very difficult to mak

On the third day we did a lot of walking. We started out in Tiananmen Square—where thousands of students fighting against the government were killed by the army in 1989. In the square there is a large monument dedicated to the military that lost their lives in the battle against the students. In China the government has a lot of control and the stories chinese people are told can be a bit skewed.

At the bottom of the flag near the gate to the forbidden city we noticed guards wearing green uniforms. Viola told us that color of the military noted what type of group they were with: the army wears green, the navy wears tan and the pilots wear blue. As we walked into the city we got a chance to see the changing of the guards, much like some European cultures they do not move while on shift and change only every two hours.

In the square we also saw the grave of Emperor Mao, considered by some the greatest hero and others a terrible leader in chinese history.

The forbidden city is the very large area where the emperor, his family, the concubines and many servants lived. Home to five generations of emperors with a very rich and complex history we could only begin to grasp. The place was like a maze, we weaved through many different yards and gardens to finally find the places where the royal family resided. Who knows how many gates and lines we stood in to make it inside. Good thing we had Viola there otherwise we could have been lost inside for.. quite a while.

To enter each room or yard we always were stepping over thresholds at the door. Viola said that the thresholds were there to keep the bad spirits out and the warmth in. They vary in height based on the importance of the people living there, the higher the threshold the more important. 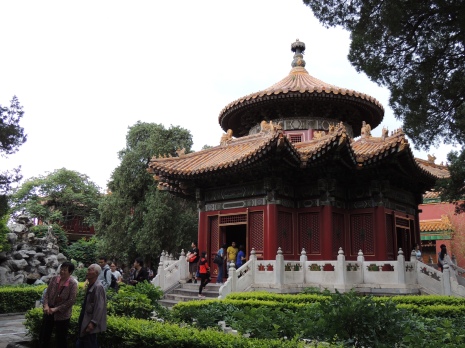 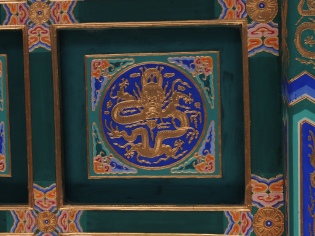 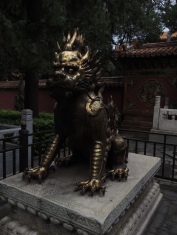 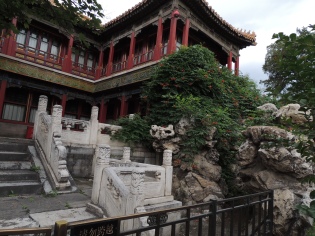 The colors and designs of buildings were extremely detailed. in one area we found a small bat with a symbol on the window frames. It seemed odd to me, but Viola explained that the word bat has a similar sound to good fortune and the symbol meant longevity.

Inside the temple my favorite part was the imperial garden, it was filled with natural rock formations, pavilions and flowers. I could have stayed and looked for hours!

Last we went to the Summer Palace of the Emperor. When we arrived Viola told us it isn’t actually palace, but a place of worship for the Dragon Lady and the Emperor’s Family. It was situated on a lovely lake that had dragon boats, endless greenery and a small pagoda that was a replica of the one in West Lake. 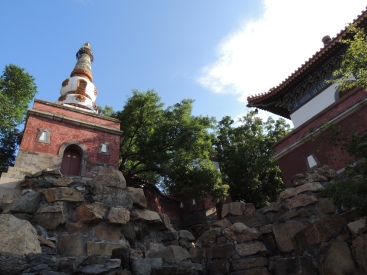 We went halfway around the lake and then headed up to the giant pavilion where the dragon lady went each day to worship the gods. There were a few hundred steps that we climbed up, in order to see things from above.

That night we took the plane to Xi’an and the 8pm flight was delayed so we didn’t make it to the hotel until midnight.

View all posts by Maggie