At 630am we scarf down breakfast, we head to the airport in cab and meet a nice couple from England traveling through Asia. Following we took a plane to Nokhom Phanom-Thailand and after we took the bus to Thakek.
Around 1pm we arrived a the boarder of Thailand and Laos, at customs we actually got the chance to walk across the boarder with both a departure (Thailand) and arrival office (Laos). I thought it was a cool experience once, but it is a bit inconvenient to get off and on the bus at board sides of the boarder. Also, this time we were applying for the Laos visa on arrival and since we needed to pay in Laos Kip we actually paid a bit more than needed.

On this bus we actually met a nice girl traveling alone from Switzerland named Parsa. She was also a climber traveling to Green Climbers Home (GCH) near Thakek, Laos and even had a climbing guide book to share with us. After arriving in Thakek, we took a tuk tuk about 12km to the GCH, settled into our new home for the week and had pad thai for dinner at the GCH restaurant.

View from our Bungalow

Inside the bungalow
Green Climbers Home (greenclimbershome.com) is a climbing hostel created by climbers fro climbers. It is a beautiful little community situated in this valley of incredible climbing near the town of Thakek in Laos. The home has two different ‘hotels’ each with their own restaurant, slack lines, training gear and hammocks. At GCH there are a variety of ways to stay for pretty cheap, but we choose to stay in our own little bungalow.
12.03 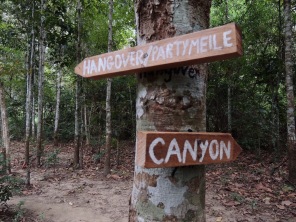 Day 1 of climbing – We woke up early at 6am, had breakfast at GCH and headed over to areas called “Partymiele & Hangover.” At Partymiele we did a variety of warm up routes and then we did the classic route on Hangoverwall called “Scwitzerland 7a”
We went back for lunch at GCH, took a little nap and then did a bit of an awkward route called acro yoga.
That night before bed we socialized with Daan from the Netherlands an Dimitri from Ukraine. These two met at a hostel in Thailand and were traveling the Thakek 3-day Motorbike Loop when they happened upon GCH. These two were not climbers, but happened upon GCH on accident after trekking through the cave. After talking to them a bit Johannes convinced them to stay and climb with him as their mentor.
12.04
Day 2 of climbing –
We got up later at 7am and and headed to elephant wall with Daan and Dimitri. We helped them get started and after we did our 6a/b warm ups near by. After these routes we tried Jungle King 7b (a long route, about 35m) and while Johannes was climbing the suspicious brown goat in the corner started silently giving birth to triplets🐐🐐🐐! One was black with a white head, the second was brown/white and the third was all black. What a fun expereience. It was a bit odd though because the only other people around were korean and did not speak english, soto show them what was happening i just pointed and made sounds 😅 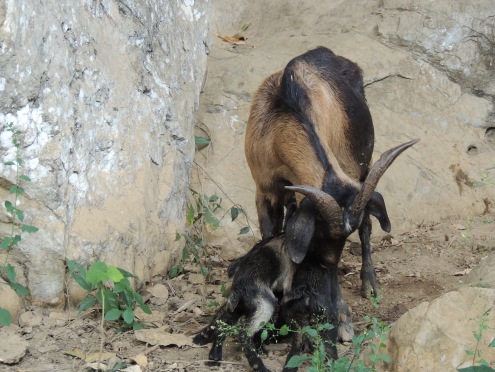 Newborn goats
Following this we tried sound of music 7a and we shared a large fresh watermelon with our friends dimitri and daan.

These two had been traveling for a few months to a few years on almost no money through the most interesting places. Dimitri was saying how he spent a lot of time in Iran learning Farsi, hitchhiking around the country. Then he also spent a fair amount of time in india where he was taken aback by the humans popping on side of road in the city. Although I do not think I am that adventurous to spend months of my life in countries like this I really enjoyed hearing his unique stories and

12.05
Rest day-
To get to town it was more than a walk and a bit expensive taking a tuk tuk, but we managed to get a ride into town, exchange money and rent motorbikeride.

In Thakek, Laos one of the biggest things to do is the 3 day motorbike loop with many stops along the way including caves, lakes and rivers. We didnt want to take the time too see it all, but we did make some of the closest stops to the city.

First we got the essentials -water, dragon fruit and watermelon. Next we stared on the path to the elephant cave first, but we ran into a bit of a road block with this fairly large stream. Some other tourists said this cave was “no good” which i can now understand they meant the path. However, Joahnnes and I being more adventurers than them we walked over the river and headed to the cave (100 meters). There was no one at this cave and we walked through this incredible open field with many cows grazing and children playing. It almost felt as if you stepped into another world. 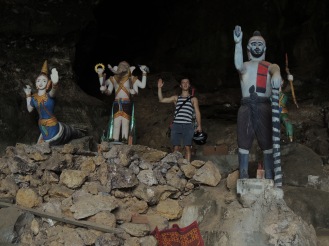 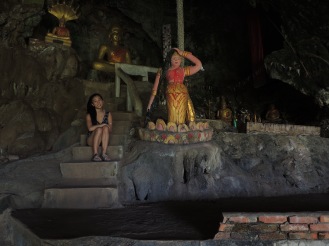 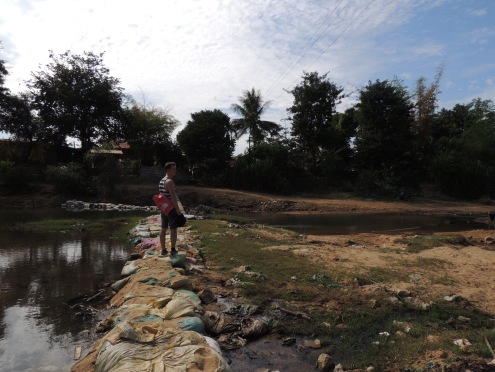 Road Block
Following this we went to the buddah cave, this cave was located on a river and the sign said that 2001 or something a man wondered into this cave to look for bats and he ended up finding over 200 buddah statues instead.  The first night he saw them he said nothing to anyone and was not even sure if they were real, but later he went back with a group and found the statues again. Ever since the people have been guarding the buddhas 24/7 in this cave.
The cave was nice, but there were many people in the cave watching us and lots of video cameras which was a bit unsettling to me. Regardless the lake was beautiful and we followed the path to another cave near by and found a wonderful pier in the middle of a beautiful lake in Laos! 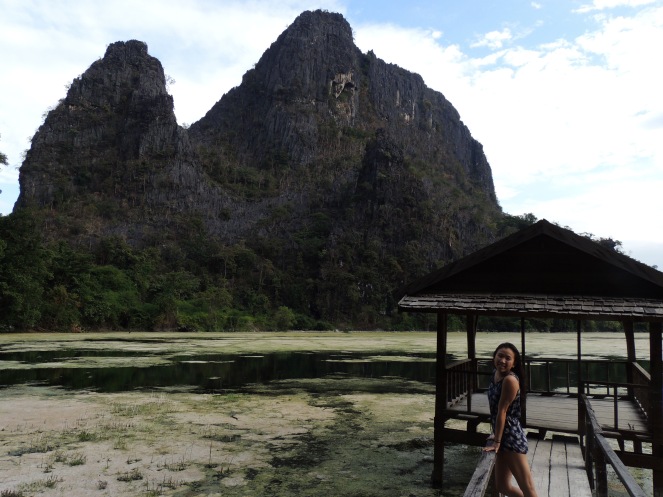 Lake
Overall, the caves werent so impressive, but at least we made it and got to see more of the real laos countryside outside the climbing areas! 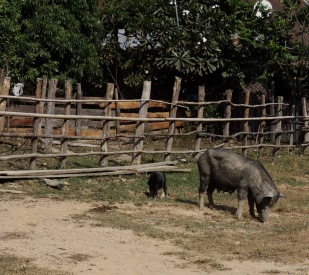 After, we headed to the river and found a very peaceful spot to eat dragon fruit with locals in little paddle boats passing by peacefully now and then.
Finally, we got a nice dinner in town (that took forever..) and had a bit of a high stress period with johannes sending his parents a video and me downloading documents for a paper to my phone with terrible wifi and a dying computer.. BUT we finished both with even 5% battery to spare(:
Then, we returned the scooter, bought some banana bread, cookies and more fruits (2 watermelon, 2 packs of bananas and 4 dragon fruit) before heading back to GCH.
Only issue was.. we didnt have a ride. We walked for a bit, but eventually was picked up by three nice young guys who refused to leave us anywhere, but GCH (about 12km from town) and would only take cookies in return 🍪
12.06
Day 3 of climbing – We had noodle soup for breakfast at GCH and went to the partymiele and hangover area. There we climbed some nice 6b,c routes and also finished up schwitzerland 7a. After we checked out the music hall before sending sound of music 7a as well.

Johannes at Music Hall
Finally, Johannes gave Jungle king a good burn, but missed the send by one bolt. That night we had good conversation with new friends Mathias (Switzerland) and Hege (Norway).
12.07

We had noodle soup breakfast at GCH. We started on a 30 meter 6b in the climbers home area and then went to the hangover wall again, where I flashed stalker 7a.

After Johannes sent jungle king 7b a route over 30m long at the roof we met these nice guys reinard and nahu for the 4th day in a row. It was quite funny because we didnt know them well, but we kept running into each other at the same climbing areas each day(:
Then we went to open all hours area, where we both finished L4 – 7a before having dinner and sleeping well after a long day of climbing.
12.08
Day 5 of climbing and unfortunately our last day already, early morning we did a 6c at partymiele and then finished sintersitzer 7a. 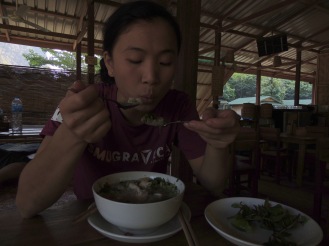 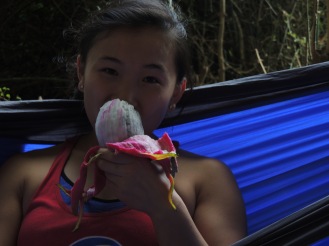 Dragon Fruit
We had planned to climb the whole day.. but after this we were just done. Instead of climbing more, we took some pictures, tried the rice soup and went to see the baby goats again. Unfortunately when we arrived at the rood the baby goats were gone, but our friends hege, sam, michelle and prisca were climbing. We chatted for a while and watched sam almost finish his project 7b+. 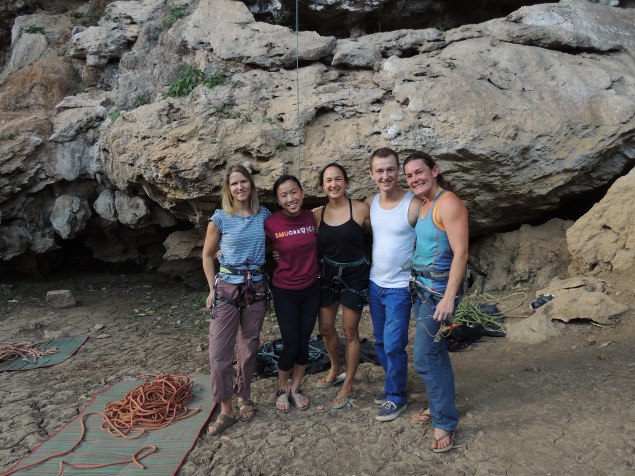 L to R: Rebekka, Me, Prisca, Johannes, Hege
After we took our tuktuk to thakek, we got more dragon fruit/bananas and crossed the boarder to nokhom phanom on a big charter bus with one other person! We arrived in Thailand, checked into the terrible little motel, got food and slept before our flight the next morning to Bangkok!
More info on GCH: https://www.youtube.com/watch?v=vbnLgbhsrTI

View all posts by Maggie